Teiji Ito (1935-1982) collaborated widely with key figures of the New York underground culture from the mid 1950s to the early 1980s, perhaps most significantly with legendary experimental filmmakers Maya Deren (to whom he was married from 1960) and Marie Menken. After meeting Deren aged 20 in 1955 his career as a composer and performer was radically accelerated. Ito creating the soundtrack to Deren’s 1958 film , and their collaboration arguably culminated with his incredible score to Deren’s best known film, , composed 16 years after the film was made but applied retrospectively to it.

Much of Ito’s work was not rigorously scored to paper, but rather driven by a set of guiding ideas that would be collected and later recorded directly to multi-track tape. For this reason, performances of his music today are incredibly rare. For this unique event, researcher and musician Michiko Ogawa has transcribed Ito’s original recordings in detail, and assembled a group of musicians to realise a world first live performance of 6 of Ito’s most well-known film scores set to the 16mm films of Deren and Menken.

Michiko Ogawa is a Japanese clarinetist, and a doctoral candidate at the University of California, San Diego, where she she is undertaking research on work and life of Teiji Ito. She is in the beginning stages of writing a biography of Ito’s life.

will be performed by Ogawa and her long-term collaborator Samuel Dunscombe, a performer-composer who works in a diverse range of areas, from field recording to Romanian spectral music. They will be accompanied by Nat Grant, Kaylie Melville, Sam Pankhurst, James Rushford and Kim Tan. Film prints from the National Film and Sound Archive, Canberra.

for solo clarinet is rare amongst Ito’s output for being fully, meticulously notated. The origins and function of this piece are not clear - a note at the bottom of the score reads “for film,” but there is no surviving evidence for what film it was to accompany, who the director was, or if a film was ever made in the first place.

Meshes of the Afternoon, 1943
dir. Maya Deren and Alexander Hammid
15’

is perhaps the most significant work that forms both Ito and Deren’s ouvre. Ito’s composition was added to the film, in 1959, 16 years after it was made. Deren’s circular narrative structure repeats visual motifs which question reality through what appears as hazy, dreamlike recollections of the unconscious. Ito’s score, a set of leitmotifs tie individual instruments to specific visual elements of the film. The instrumentation and musical materials of the score reference traditional Japanese music such as Gagaku.

focuses mainly on details from the fountains, wrought-iron fences, and sculptures in the gardens of Versailles. In Ito’s score a naive elegance is created between guitar and clarinet, interrupted by lively gestures from cymbals and zither highlighting the drama of Menken’s cinematography.

In Teiji Ito’s upbeat soundtrack accompanies a 16mm stop motion animation of dancing everyday objects, such as pebbles, beads, shells, and rice over colour pencil drawings from the artist Dwight Ripley. This extremely light-hearted short film was made to cheer up a sick friend. The soundtrack matches the films playful imagery both in the improvisatory way Ito combines musical influences from North and South America, and the Caribbean; and in the way that sections of improvised material were then formed into a larger composition in a cut-up fashion.

was Maya Deren’s last completed film, her first collaboration with Ito and the most celebrated of his compositional works. This film, shown in photographic negative, depicts a group of dancers reenacting a series of astrological relationships against a starry sky in solo, duo, and group scenes. Within the soundtrack individual instruments give voice to the characters on screen directly mapping a one to one relationship between body and composition. 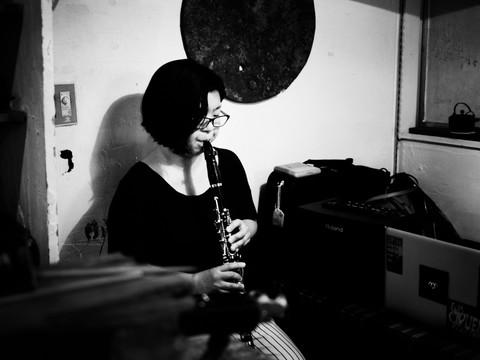 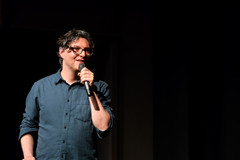 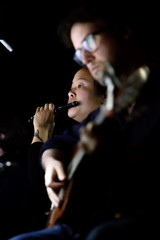 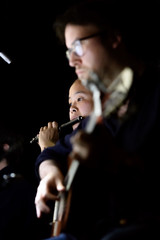 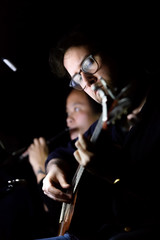 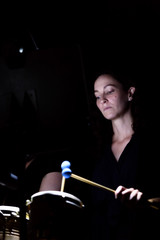 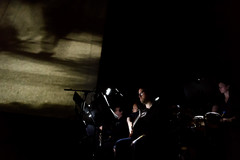 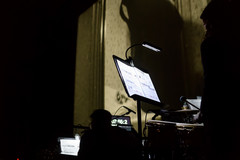 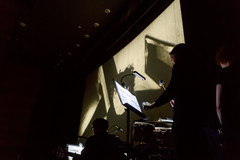 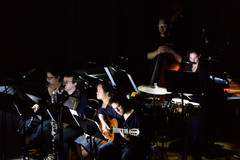 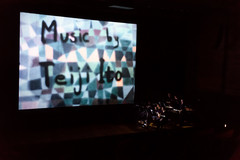 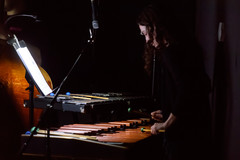 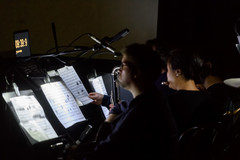